The skunking of all five special election budget measures backed by Governor Arnold and the Can’t Shoot Straight Legislature was a clear signal that voters are way beyond fed up with half-measures, marginal fixes and smoke and mirrors in Sacramento.

Like a winless team trotting out a five-lateral trick play in the final seconds of the last game of the season, Schwarzenegger and the Legislature tried to pull a fast one, hoping to avoid facing the hard reality that it’s time for fundamental political change in California.

“The public is making a statement, loud and clear, that they expect action,” said Jim Wunderman, CEO of the Bay Area Council. “The seriousness of the problem has reached a crescendo.”

Executives of the council today are scheduled to roll out the most serious call for sweeping political reform in California since Hiram Johnson – an ambitious plan for an historic constitutional convention to overhaul the fiscal, management and electoral structures and operations of a government that spends $144 billion a year, chronically fails to pass a budget and has plunged the state into a thick muck of debt it will take decades to clean up.

With recession sapping the economic strength of the state, and voters holding record-low opinions of their state leaders, the time is ripe for this kind of quantum change. In parallel with the Bay Area Council, the good government group California Forward has launched its own agenda of political reform, while partisans and policy wonks alike prepare to fight for initiatives on reforms like open primary elections and dumping the two-thirds requirements for passing budgets and taxes.

Since the 1978 passage of Proposition 13, when Sacramento took on the task of managing the impact of property tax cuts in cities, counties and special districts across the state, the on-the-fly reorganization of political and financial relations between the Capitol and its provinces, coupled with a decades-long binge of budgeting by ballot box, has steadily evolved into a Byzantine patchwork of stunted and often self-canceling imperatives and ideologies.

By now, democracy — in the sense of a government by, of and for the people — has become so completely distorted, perverted and corrupted in California that tinkering, however well-intentioned, is not enough. It’s not about “blowing up boxes,” as Arnold famously, and demagogically, promised to do. It’s about dismantling and rebuilding democratic government based on three key values: accountability, trust and modern, measurable performance of the people and programs funded by taxpayers.

None of this is entirely new, of course. As with most things about California, the writer Carey McWilliams got it right — in 1949 — when he offered this assessment in “California: The Great Exception.”

“California, the giant adolescent, has been outgrowing its governmental clothes now, for a hundred years. The first state constitution was itself an improvisation; and from that time to the present, governmental services have lagged far behind population growth. Other states have gone through this phase too, but California has never emerged from it. It is this fact which underlies the notorious lack of social and political equilibrium in California.”

But in the past 60 years, things have gotten worse. The system today is constricted, subverted and hamstrung by special-interest ballot propositions, two-thirds vote requirements, gerrymandering, term limits and raging rivers of free-flowing political cash. The governor and Legislature have been circumscribed and neutered.

California Forward, a civic improvement coalition created by California Common Cause, Center for Governmental Studies, New California Network and The Commonwealth Club of California’s Voices of Reform Project, is advocating short-term fixes for the budget and is considering long-term reforms as well.

Short term, they’re pushing for managing the spikes in state revenues, a pay-as-you-go requirement, results-based budgeting, a two-year budget and other reforms. As a bipartisan group, they have not yet been able to agree on whether to push to reduce the two-thirds requirement for passing the budget and/or raising revenues.

But California Forward co-chairman Bob Hertzberg, a former Democratic Speaker of the Assembly, personally believes the most important reform would be to return power to local governments – where accountability is most immediate — and give them the power to raise funds by majority vote.

“The key to restoring democracy in California is bringing government closer to the people,” he said. “People should be getting what they’re paying for and paying for what they want.” 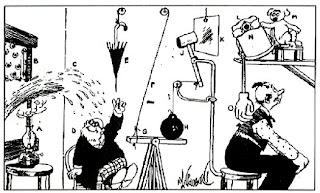 The scale at which state government is trying to operate – by funding education, health care, public safety and the like for 38 million people – is simply too large. The unintended consequences of Proposition 13 – which shifted money and power to Sacramento – must be undone, he argues.

Specific solutions aside for now, fixing the fetid mess in Sacramento will require the commitment, not just of politicians who see the writing on the wall, but also of the mainstream media, which has nurtured widespread ignorance about the business of state politics and government by systematically ignoring it: Not a single TV station from a major California city has a bureau there.*

Most of all, it will require the involvement of taxpaying citizens, who must bear responsibility for choices that have yielded harmful, if unintended, political consequences.

“We need a citizen-induced fix,” as Wunderman puts it: “California government is not only broken, it has become destructive to our future.”