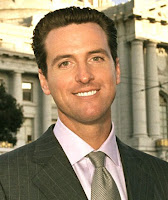 — Fight to change the two-thirds vote requirements for passing a budget and raising taxes in the Legislature, to end the GOP’s minority veto. Government by Twitter: Newsom said he had favored a 55-percent requirement, but a recent “firestorm” of comments to his Twitter account convinced him to rethink a 50-percent-plus-one standard.

— Consider an amendment to Proposition 13 establishing a split roll property tax assessment system, relaxing limits on annual increases for commercial real estate while leaving intact restrictions on residential property raises, a change that would generate billions for government. Prop. 13 long has been the third rail of California politics, but Newsom said that voters he has met “want that to be on the table.”

— Rule out future increases in state income tax rates, but might support a plan to “modernize” the state sales tax, lowering the rate but extending it beyond sales of goods to a range of services.

— Oppose any expansion of offshore oil drilling in California. Newsom said he was “disappointed that Obama changed his position on that.”

— Support efforts, as a matter of public safety, to permit illegal immigrants to have drivers’ licenses. Newsom pointed with pride to a widely inclusive system for public identity cards in San Francisco, calling it “a national model.”