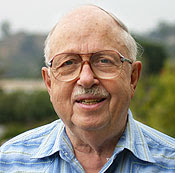 The University of California Santa Barbara has acquired the papers of the prolific and prodigious political reporter Lou Cannon, who has written five books about Ronald Reagan among the nine he has published.

“I wrote my first book, ‘Ronnie and Jesse,’ because I didn’t understand Ronald Reagan or Jess Unruh and thought if I wrote a book I’d understand them better,” said Cannon, who covered politics for the Washington Post for 26 years, at a reception last night announcing the acquisition by the Special Collections department of UCSB’s Davidson Library.

“When Reagan, who usually took little notice of biographers, mentioned to me that he’d heard I was writing a second book about him, I said, ‘Yes, sir, I’m going to continue writing about you until I get it right,” he said. “We both laughed, but I meant it. ‘Good line,’ was Reagan’s response, from him high praise.”

Besides “Ronnie and Jesse,” published in 1969, Cannon also wrote “Reagan” (1982), “Ronald Reagan: The Role of a Lifetime” (1991), and “Governor Reagan: His Rise to Power” (2003). He is also the author of “Official Negligence: How Rodney King and the Riots Changed Los Angeles and the LAPD,” published in 1997. Some 84 boxes of his primary source material for these five books, including interviews, tapes, and other documents, are included in the collection, which will be available to scholars, researchers and journalists as the papers are archived.

The 75-year old Cannon, who was a Sacramento reporter for the San Jose Mercury News early in his career, also wrote “Ronald Reagan: The Presidential Portfolio” based on the Reagan Library collection (2001), as well as “The McCloskey Challenge” (1972) and “Reporting: An Inside View” (1977). Last year, he and his journalist son, Carl, co-authored “Reagan’s Disciple: George W. Bush’s quest for a presidential legacy.”

Among those on hand for the event were the famed network political reporter Sander Vanocur, and authors Ann Louise Bardach, Gayle Lynds and Kathleen Sharp. Cannon thanked his wife, Mary, who researched and indexed much of the collection, and philanthropists Sara Miller McCune, publisher of Miller-McCune magazine, and Pat Van Every, whose contributions helped support the acquisition.

“My animating goal as a writer,” he said, “was expressed by A.J. Liebling…when he said ‘facts are precious and opinions are cheap.’”