— Newspapers can invest more resources, not less, in local reporting, leaving every national, international news and sports story to the national papers and wire services. They have to concentrate all of their force and fire power on their own communities, making themselves indispensable to local residents. People need to feel that they have to take the local paper to know what’s going on in their hometown. It’s the only way to maintain and grow circulation.
.
— Or, a business like Google or Yahoo, which is expert at online advertising – including personalization at the individual user level – can begin to pay reporters in communities to produce content. We’re talking about covering city councils and school boards, writing about local development and utilities, local sports and arts, etc. This might kill local newspapers, but it might save local reporting. 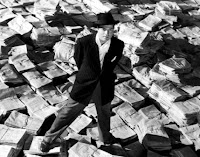